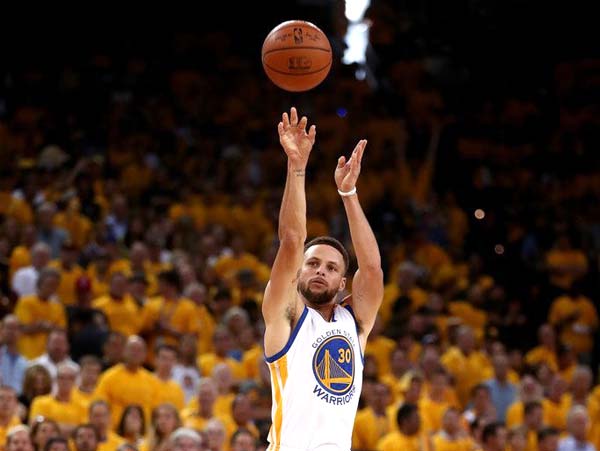 Today I wanna raise a subject that I’ve always struggled with as a player – shooting the ball.

Shooting is the most common way points are being made in the game, therefore it’s an utmost important skill to have, if not THE most.

But developing an effective jumper is not an easy task… many people struggle with their form and suffer from poor mechanics.

Luckily today, we have a lot of NBA players in the spotlight to learn from.

One huge star that comes to mind is Stephen Curry, who set a single-season record for most three-pointers ever made and is ranked 3rd on the NBA all-time 3-point list.

He has developed a reputation of a consistent, “pure” shooter, and it seems like every shot he takes is going to swish right through the net.

But what sets Curry’s shot apart from everyone else?

Well, here are a few things we could learn by looking at the following footage:

We’ve all heard this expression from our coach:

When I was a kid, I was always told to do that.

However, it plays out differently in Curry’s case.

While most players were taught to keep ten toes pointed straight to the rim, Curry maintains an excellent balance and control by actually turning his feet about 10 degrees away from the rim towards his weak hand.

In doing so, he aligns his hip and right shoulder to the basket, which leads to a straighter shot coming from his right arm.

This technique also seems to solve the problem of keeping your elbow tucked in.

The irony is, Curry himself claims to square his feet, but as you can see from the footage above, he clearly turns them.

So there are two options here… either:

B) He simply doesn’t want to make it easy for others to copy him.

When Shooting off the pass, Curry dips the ball, dropping it a few inches below from where he caught it.

It turns out this dip is very important for power and rhythm, and it also what helps Curry to shoot straighter based on Newton’s first law of motion (the law of inertia) which says:

An object in motion will stay in motion until it’s affected by an opposing force.

A good example to demonstrate this principle is bowling.

When a bowling player approaches to throw the ball, he first cocks his hand back, and only then launches it forward.

This action of pulling the ball back makes it much more accurate because when the ball is released, it already has some energy going in the direction you’re sending it in.

The same principle can be applied to basketball.

Dipping the ball increases the inertia, thus making your shot more accurate and less likely to deviate left or right.

And Just like in the first case, Steph denies the fact he dips the ball.

Could he really be so unaware of his shooting form? I don’t think so.

Anyway, Curry likes to take his shots off the pass… this allows him to set his form as he catches the ball, which makes it easier for him to catch and shoot in real-time.

When he catches the ball, he slightly lowers his arms and then raises them up over his head as he’s jumping, which gives him a steady release and more power for long-distance shots.

Curry is a one-motion shooter, which means there’s no hitch or stopping, he releases the ball in one fluid motion.

This form can be problematic though because it’s not ideal for close-range shots and you usually need a lot of space to avoid being blocked.

But the good thing about being a one-motion shooter is that your release is super-quick.

On the other hand, you can’t jump very high when shooting this way, so it’s a trade-off.

Which one’s better? Well, it depends.

If you’re mostly a long-distance shooter like Curry, the one-motion shot will work perfect for you. But if you’re more of a penetrator type of player who likes to take tough contested shots like Kobe or Chris Paul, you’d feel better with a two-motion shot.

One thing’s for sure, the one-motion jumper works great for Curry, but it’s really up to you if you wanna adopt it or not.

I personally prefer the two-motion shot because I kinda got used to it, it gives me more control on the force I put into the shot when taking tough shots.

Steph uses very little knee flexion when he shoots – his legs are just slightly bent to give him enough power to jump, and he uses speed as the main driving force.

Due to this, Curry was measured to have one of the fastest releases in the NBA.

How does flexing your knees less speeds up your shot?

Hence, try to use less knee flexion when shooting and don’t be like that guy in the picture above.

If you feel like you need more force in your jump, try using your toes as well.

Well, I hate to do that, but don’t blame me—blame Curry, ’cause when it comes to his landing width, he’s breaking the rule many times by landing wide (as seen in the video).

Shooting narrow is important especially for guards because it enhances the speed of the shot, and guards need to be quick with it.

But in his case, he’s such a good shooter that he can break the rules and still get away with it.

The reason for that is that Curry is very consistent with his upper-body, so he can do whatever he wants with his legs and still score.

This comes to show you that the main component to his success is his consistent release.

By the way, if you noticed from watching the video, Curry also likes to land forward from where he jumped.

This allows him to create more momentum with his body and shoot more easily from long distances. It’s called the Sweep & Sway, and I’m gonna get into to that later on in another post.

So there you have it. These are the five techniques Curry uses to make himself an unstoppable shooter.

These are things you can start practicing right now, and the sooner you’ll start implementing them, the better off your shot will be.

Until then, good luck!

Born and raised in sunny Florida, Jesse Parker grew up spending most of his days outdoors playing hoops and honing his basketball skills. He has a huge love for the game and is always striving to get better at it. His latest obsession is the subject of vertical jumping and dunking.

Let me introduce myself.

My name is Jesse and I’m crazy about working out.

I can’t go a day in life without running, jumping, or pushing something.

Basketball has all three, so I guess it was unavoidable.

If I’m not home or at work, I’m probably at the gym enjoying some quality time with the biggest love of my life. But shhhh… don’t tell that to my wife, I always tell her she’s the biggest one 😉

Anyway, if you want to become a better baller, you’ve come to the right place.

In this website I’m gonna be sharing knowledge and tips you could use to better yourself as a player and as an athlete, and help bring out your A-game.

If you like the stuff you see here and want to know more about the man behind the curtains, come checkout my story.

Boingvert Review: How the Program Works and Why It's NOT so Great

The #1 Best Vertical Jump Training Program for Dunking in 2022

Vert Shock Review: Does the Program Actually Work or Is It a Scam? Our FINAL Verdict After Doing It Twice

How a 5'5" Player Trained Himself to Dunk

The Jump Manual Review – The TRUTH About This Program & My Results